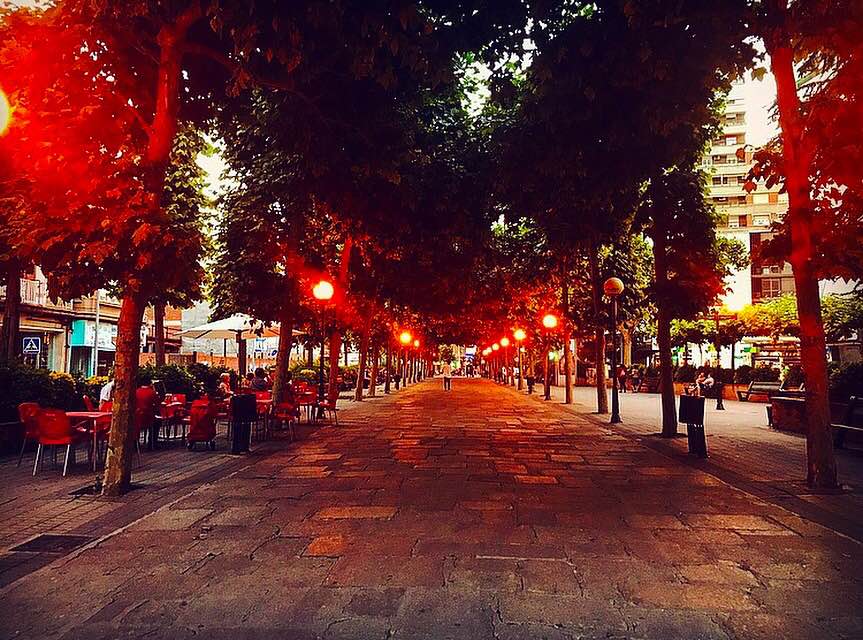 Talavera de la Reina is a city in the western part of the area of Toledo in Spain. It’s population of 83,793 makes it bigger than the city of Toledo, although Toledo still remains the regional capital.

The city is situated along the river Tajo. There are two islands in the center of the city called Isla Grande and Chamelo Island. It is surrounded by two ranges of mountains, in the north the Sierra de San Vicente, and in the south, Montes de Toledo.

Talavera is divided in two by the river Tajo, with both parts being connected by three bridges, one of which was built in the Middle Ages.

The Spanish city has a nice climate. Summers are hot and extremely dry, and winters are moderately mild and cool. However, the climate is slightly warmer than Madrid. The area is very fertile with Mediterranean forests, elms and olive trees with green areas and parks within the city.

Talavera de la Reina is the original place where the famous blue and yellow “Talavera” tiles were first made. Both the technique and the tradition of covering church domes and walls with colorful tiles traveled to America with the exploring Spaniards. Architectural and artistic tiles are still made in Talavera today.

In the fifteenth century, Jan Floris brought new styles from Holland. He created a factory which started the pottery tradition of the city.

Ceramics of Talavera have been used to make fountains around the city.

Things to do in Talavera de la Reina

There are many different things for students to see and do in Talavera de la Reina. Students can visit local sites such as Nuestra Señora del Prado Basilica, the Prado Gardens, the Ethnographic Museum, and the Ceramics Museum. The Ceramics Ruiz de Luna Museum deals with the story of ceramics in this city and the production of this treasure.

Talavera de la Reina still holds an old city which is worth visiting. Nuestra Señora del Prado Basilica stands out in the road that links Madrid with Extremadura. This temple was originally built with a Mudejar style, is a combination of Renaissance and Baroque styles. Here, students can experiencce the “Ceramics Sistine Chapel” because of the unique tiled pieces which decorate the room.

Next to the basilica you have the Bull Ring. Both the bull ring and the sanctuary are found in the Prado Gardens, decorated with ceramics by Ruiz de Luna. This is loacted near Alameda Park.

If you keep walking to the Ronda of the Cañillo, you will reach the old city, surrounded by the wall enclosure from the Muslim period. The Albarranas Towers and the Seville Gate can be seen which are well-preserved.

In San Pedro plaza, you will find the Mothers Bernardas Convent. Next to it you find San Agustín plaza, one of the most symbolic spots in Talavera. This is where the Saint Agustín Old Church by Fray Lorenzo of Saint Nicolás is. Here you will also find the Ceramics Ruiz de Luna Museum.

From Saint Agustín Street you will end up at Saint Jerónimo or Saint Prudenco Convent. Behind the temple and facing the River Tajo, you can go to the Ethnographic Museum, where students can learn the history, customs and traditions of the region. From this point you can view the bridges crossing the river, the Old Bridge and the Iron Bridge.

Talavera is a very Spanish looking city with many cobblestone side streets with local restaraunts and bars for the locals or visitors to enjoy.

Talavera is rich in Spanish Culture where students can experience the language, food and lifestyle of a local Spanish City, and get a taste of what it is like to live as a Spaniard.

For more information about what to see and do, click here